What could be healthier than vegan food made with wholesome ingredients?

I'm not vegan, but I do love vegan food.  Even all veggie based foods can be made unhealthy though..

Here's what's in the patty of the burger I ordered:

Sign me up, that sounds great!  This burger tasted fantastic, but along with the side salad, I felt really stuffed afterwards. It was too much food.  Trying to be my own impartial observer, I questioned why I continued eating when I was thinking, "this is way too much food".  I reasoned, it's mostly veggies, it wont be too bad.

Beans, lentils, and rice in addition to being packed with great nutrition, are also somewhat calorie dense providing around 220 calories per cup (1 cup of grilled lean ground beef has 330 calories). It doesn't matter where you get your excess calories from; too much is too much.  An advantage of having more plant based foods in your diet is the high fibre low fat will have fewer calories but still be filling, plus deliver more vitamins and minerals.  This is sort of good, we don't really want to eat until full.  Doing so is a guarantee of eating too much. Still, it's preferable to eat a big plate of low calorie veggies and feel satisfied compared to eating a 1/4 plate of fatty food that has twice the calories and still leaves a lot of room in the gut that is tempting to fill. 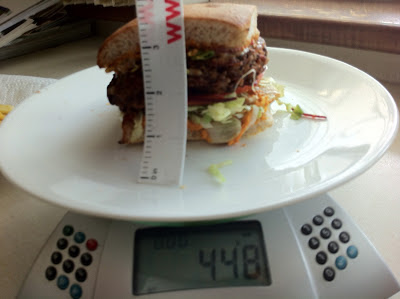 At about 3 inches (7.5 cm) tall and 3.5 (9 cm) inches wide, this burger is taller than the average mouth can open.  Not too much of a big deal, but does this lean towards the concept of serving gargantuan serving sizes? Could it possibly be more reasonable to make a burger that you can actually fit your mouth around?

Trying to get your mouth around this huge burger will trigger most to perceive that this burger is better because it's bigger, and that it's a good deal because you get so much for your dollar, and even that it might be a bit of a fun challenge to try to eat this beast.  Each of these values associate a positive connection with an over-serving of food; and we might be completely aloof to the fact that our enjoyment of a great tasting huge vegan burger is actually supporting overeating.  That's why this kind of eating is referred to as "mindless eating".

It's also another reason I kept eating even though I contemplated stopping.  The high salt, carb (sugar), and fat content will have been messing with my brain, stimulating my appetite.  It's the food chemistry that causes us to feel ravenous while eating, and food companies know this, that's why food is made this way.

We're responding to external triggers to eat more, as well as chemical triggers, found in high concentrations of salt, fat, and sugar.

What?  Say it ain't so.  A vegan restaurant using the same food composition tactic that big food companies use to get you addicted to their food?  Whether by accident or on purpose, making foods with high concentrations of this tripple threat tastes really good, that's why people gravitate towards it, but for sure the outcome is people will feel very compelled to want to eat it again, because of the resulting altered brain chemistry that increases appetite.

And what a nice twist on the tripple threat; make it vegan so it has the image of being healthy, thus diverting our attention from the fact that it's still very high calorie and high sodium, perhaps even allowing us to go into denial and justify the huge serving sizes because we perceive it all as being ok because it's green, it's local, vegan, organic, and animal friendly.  All good things for sure, but when the serving sizes are too big and sodium is through the roof, do we really want to fool ourselves?

I fooled myself, those are the justifications I made.  When I decided to do the breakdown of what I was eating from this much venerated vegan burger joint, I was surprised, and upset at the same time.  It was like an "et tu Brute" moment.

Serving sizes have increased by more than 40% since the 1980's, even more than 100% for some items like popcorn, soda, and potato chips.  We've become more expecting of the bigger is better idea, while not necessarily being cognizant of the fact that big servings results in mega calories.

At 448 grams, how does this vegan burger compare to other popular burgers?

Using nutrition databases on the internet I've put together a reasonable estimate of how many calories there are in this 1 pound burger..

I'm not sure what the fat content of the condiments are, but in total this burger will be anywhere between 500 and 600 calories, which isn't that bad at all, if that's the only item you oder, but it's very easy to miss hidden fats and sugars in the condiments so there might be more calories.   This burger could easily be 700 + calories, and is unlikely to be less than 500.  Very comparable to typical fast food burgers in terms of calories, but significantly more nutrient dense.

For the sodium content I called the restaurant and they were friendly enough to tell me how much sodium they put in a batch of 400 bean patties, which worked out to about 140mg of sodium per burger, which would be perfectly reasonable.  However, the food prep person I spoke with was candid, letting me know that the canned beans, the peppers and the other ingredients already have salt in them from their supplier, which will likely be very high sodium items.

The person on the phone mentioned since they went on a low sodium diet themselves that they had stopped eating food at this vegan restaurant.  She mentioned that they are not a low sodium place, but did mention that they are animal friendly. I told her I wish they were as concerned about humans health as much as they were about animals.  She sighed and said she would pass that along to the owners.

I told her some of the food they sell is just as high in calories and sodium as a meal at McDonalds so I'm reluctant to keep eating there.

The sodium content in this burger is likely to be around 500 mg, but could be higher.

What about the fries?  Can you really make fries healthy?  Sure. I've made oven baked fries that were healthy.  I used spices instead of oil and salt to add flavour.

How do the vegan fries compare to other fast food fries? 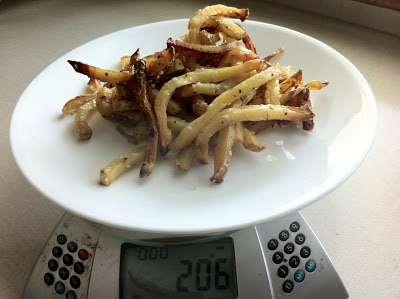 The fries were oven baked potatoes, "drizzled in sunflower oil, sea salt and pepper".  The sea salt thing is offensive to me.  Offensive because there is absolutely zero health advantage to sea salt.  It is no different than processed salt, but, it's sold as being a healthy alternative to regular table salt.  Why is that offensive?  Because it's a lie.  A lie meant to convince people that sea salt is better for their health, but is actually no different.  And you pay a premium for that lie.

Greasy fingers from greasy fries.  I don't find any redeeming nutritional qualities to these fries.  They are no better for your health than regular fries at any fast food place. 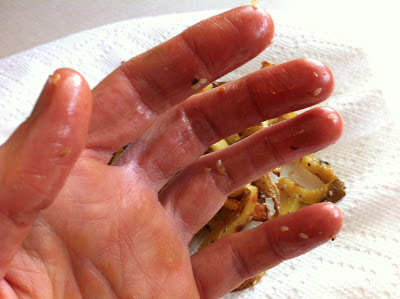 Order medium or large fries and you're over 1500 calories and 2500mg of sodium total.

I went to this place on opening day.  Couldn't wait.  Loved the taste.  Even tried the fries, which I didn't finish because they were just as greasy as any fries I'd had, and I don't like greasy.

I spoke to the owner about how greasy I thought the fries were and he didn't take it very well.  In fact he was quite certain one could drink a cup of olive oil straight and it would be good for you.  I told him no, drinking olive oil straight would have a laxative effect causing very oily stool, and although olive oil is healthy in appropriate amounts, consuming 1600 calories of olive oil at one time would certainly not be healthy.

I also pointed out that virgin and extra virgin olive oil have a low smoke point and are not suitable for high temperature cooking, such as baking fries in an oven.  Also, the high temps will break down much of the healthy compounds in olive oil negating any health effects.  You can get processed olive oil that is more heat stable with a higher smoke point, but typically other oils like safflower and sunflower oil are used for cooking.  Although he blew a gasket at me, he also contacted me later to apologize for doing so and comped me a meal.

I don't know if it was my conversation with the owner back then that caused them to switch from olive oil to sunflower oil, but I think I may have planted the seed.

Recently I spoke with a server working there after having finished a burger.  We spoke about the high calorie, high sodium thing, and how that seems to be the opposite of what a vegan, organic ingredient restaurant is trying to portray.  She replied, "it's burgers and fries, what do you expect?"

So they know their food is high sodium, and that much of what they serve is very high calorie.

I guess I expected that since this place is all about organic, vegan friendly ingredients, that finally somebody decided to create a restaurant that made truly healthy meals, including consideration for sodium and  total calories.

You will get substantially better nutrient density from the food at this Winnipeg vegan burger restaurant, which is promising, but your total calories and sodium with a burger and fries will be the same as high calorie fat bombs you get at any major burger joint, and the health risks with a high sodium, high calorie diet will still be the same.

You'll also get the same appetite altering effect (makes you more hungry the next day, makes you seek out high calorie foods).

If you manage what you eat anywhere, classic fast food burger joint or modern foodie joint, you can maintain a healthy weight, but beware of blindly falling into the habit of making these places a regular feeding trough.

It's still buyer beware, even when food is sold under the pretence of being natural and good.

This place has a lot of potential. Hopefully they realise that high sodium and high calorie is not so great.  We'll see if they change.

BTW, the burger and fries I bought for this review went in the garbage.  I didn't want to repeat my mistake of eating this stuff.

Posted by Cris LaBossiere at 4:47 PM